Symbols are an importance part of any culture and there are many significant images in Japanese folklore. Spirits play a vital role and one of the most important is the kitsune, or fox spirit. Kitsunes are depicted as intelligent shapeshifters whose magical ability increases with age. They have the ability to be benevolent or malicious depending on the situation. Some stories portray them as guardians, while others depict them as tricksters. The ambiguity of the fox makes it an interesting symbol in Japanese folklore and The Culture Tome is looking into examining the fox’s importance to Japanese culture.

A kitsune has common characteristics, which include being mystical, having a long life and having the ability to shapeshift. The older they get the more tails they are said to grow, with a nine-tailed kitsune being a common image. Kitsunes are fundamentally different to regular foxes and inhabit the spirit realm. There are two kinds of kitsune called zenko, which translates as good foxes and yako, which translates as field foxes. The zenko are benevolent, helpful spirits, while yako are mischievous entities that like to cause chaos. 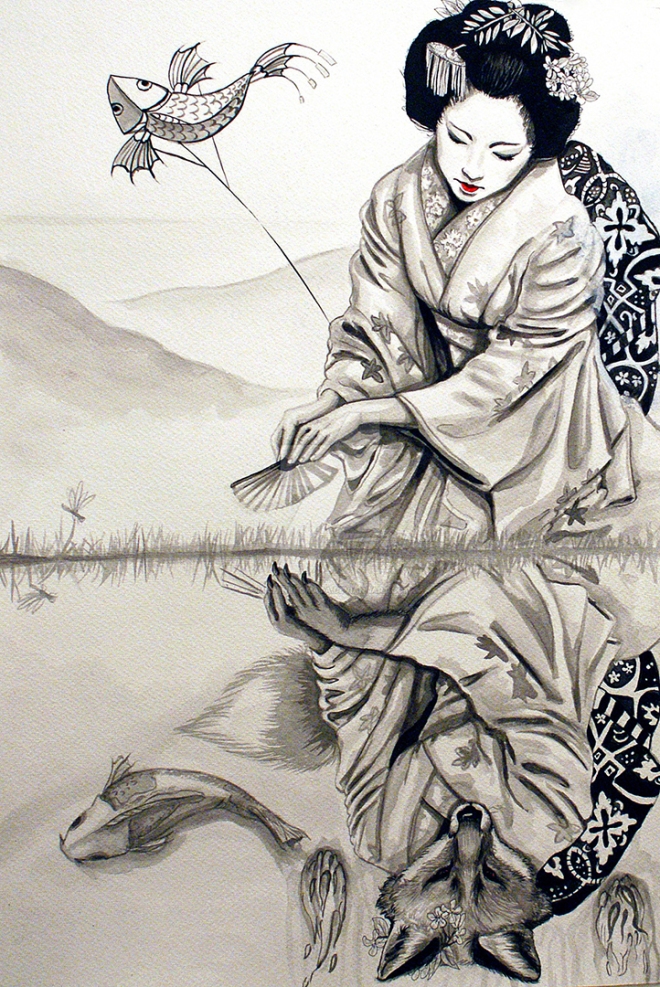 A primary ability of the kitsune is to take the shape of a human, most commonly a beautiful young woman. To change its shape, the fox needs to place reeds, a broad leaf or a skull over its head. A common medieval Japan belief was that if you encountered a woman alone on a dark night then it was likely to be a fox. Indeed, a fox-faced woman with close-set eyes and high cheekbones was said to be attractive. Some stories involved kitsune having difficulty hiding their tails and you were able to see their tails if they became drunk or careless.

Kitsunes are associated with possession, which is described by the state of kitsunetsuki. The victim is usually a young woman and the fox enters the body through the breasts or beneath the fingernails. In Glimpses of Unfamiliar Japan, folklorist Lafcadio Hearn described the possession. The state could be likened to a form of mental illness.

“Strange is the madness of those into whom demon foxes enter. Sometimes they run naked shouting through the streets. Sometimes they lie down and froth at the mouth, and yelp as a fox yelps. And on some part of the body of the possessed a moving lump appears under the skin, which seems to have a life of its own. Prick it with a needle, and it glides instantly to another place. By no grasp can it be so tightly compressed by a strong hand that it will not slip from under the fingers. Possessed folk are also said to speak and write languages of which they were totally ignorant prior to possession.”

The duality of the kitsune is interesting because they are portrayed as guardians and tricksters. The fox is associated with the Shinto god of rice, Inari. Originally, kitsune were Inari’s messengers and there are shrines dedicated to them all over Japan. They have been worshipped as kami. Inari’s kitsune were white and viewed as a sign of good luck. They protected Inari’s shrines and warded off evil.

Contrastingly, kitsune are also presented as mischievous and relish in tormenting people. They may lead travelers astray or confound them with illusions. The most wicked spirit can be vengeful and may use different tactics such as seduction or theft.

A traditional game is named after kitsune called kitsune-ken, which means fox-fist. It’s meant to symbolise the power that kitsune have over people and is similar to rock, paper, scissors. However, the three motions represent a fox, hunter and a village headman. The headman defeats the hunter because he outranks him, the hunter beats the fox because he shoots it and the fox beats the headman because it bewitches him.

The significance of the kitsune makes it one of the most intriguing creatures in Japanese folklore. There’s no doubt that foxes are clever, beautiful animals that will continue to interest us for many years to come.

Manchester based short story writer and founder of The Comic Vault and The Culture Tome. View all posts by theculturetome